The Dell House
History of the Dell House
The house has a fascinating history which we have greatly enjoyed finding more about, with the help of former owners, guests and local historians.
The house dates from 1836.  Known then as The Dell, it was built in conjunction with the adjoining church.  It has been the residence of the curate, a private house, a nature cure home, a hotel, a house of healing, a private house again, a hostel, a private house, and since 1984, holiday accommodation of some form. 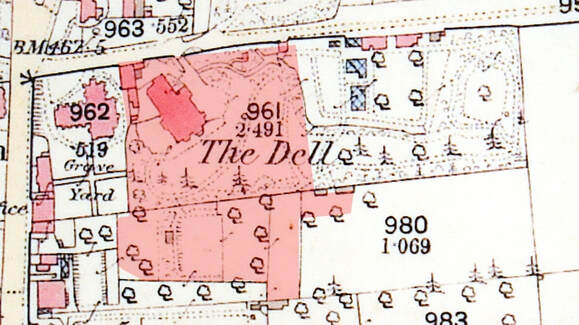 Map from 1883 with current Dell House garden highlighted. The ‘dell’ that gave the house its name is the circular area to the east marked with a tree.
In the 1830s Malvern Wells was well known for its spa, and its population was growing.  Plans were in hand to raise money for a chapel, when the Rev Peter Edward Boissier decided to move to the Wells on account of his health. As there was no nearby church he offered to purchase land to build one, as well as a residence for himself.  He bought 2 acres of farmland which we assume to be the rectangular strip running along Green Lane. He commissioned the architect R W Jearrad to design both the church and his residence.  The original price given was £1,200,  but he had underestimated the cost of building the church, and the plans for the house had to be simplified. 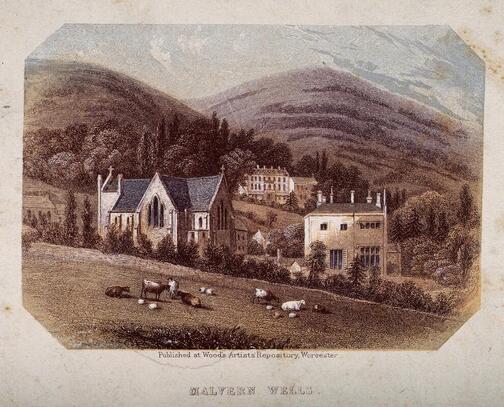 The Dell and St Peter's Church, 1843
​At Peter's Church and the Dell House were completed in 1836.  Peter Boissier was the 'Perpetual curate' of the church.  From the 1836 to 1859 Peter & Marianne Boissier lived in the Dell.  The 1841 census has Peter & Marianne Boissier living there, with Anne Damaresq, (assumed to be Marianne’s mother, age 70), Augustus (10) & Amelia (9), a Governess & five servants.  ​
In 1859 Francis Hopkinson became the Rector of St Peters Church. The 1861 census shows him living here with his wife, Ellen, and their five servants: Cook, Lady’s maid, House maid, Footman and Coachman.  The Dell remained his home when he ceased to be the curate in 1869 – a new 'vicarage' was built (presumably paid for by the family) on Hanley Road.
The Victorian gothic additions to the Dell House were added around the 1860s by the Francis Hopkinson.  These are the atrium, front tower and ‘Smoking Room’ (the little room with an exterior door to the right of the atrium) and also bays in the lounge and function room.  The Smoking Room has the Latin SALVE (welcome) and VALE (farewell) carved into the entrance steps, and has Byron’s Ode to Smoking painted on an inside wall.  We believe the garden was laid out in the early 1860s and that it was then 10 acres. Francis Hopkinson also added the summerhouse. For more about this see the Garden page

Francis Hopkinson carved a font for the church, and a pulpit and lectern.  All three works were dedicated in a service in 1867.  Following de-consecration of the church in the 1990s the pulpit and lectern were sold abroad, but the font was saved by local protest, only to then stay outside at a stone-mason’s yard in Worcester.  It was restored and came home to the Dell House in 2004, and is now in the atrium.
When Francis Hopkinson died in 1898 Ellen Hopkinson remained living in the Dell until her death in 1911. Ellen was from the Baker family of Victorian adventurers and explorers.  Her elder brother, Samuel Baker, is best known for his exploration of the Nile and the discovery of Lake Albert and the source of the Nile, for which he was knighted.  On one of his expeditions he rescued and married a Hungarian refugee, Florence, who then accompanied him on future expeditions in Africa.  His son, Rear Admiral Julian Baker, who later inherited the Dell, accompanied Samuel and Florence on his second main expedition to eradicate slavery from the White Nile in 1870.  Their story is recounted by Pat Shipman in her book To the Heart of the Nile.

​Julian Baker inherited the house in 1911. We assume he lived here until his death in 1922.  His wife was Geraldine Eugenie, daughter of General Sir Archibald Alison, and they had five children; two sons Sam and John and three daughters Maggie, Mary and Ina.
​After Julian’s death the house remained in the Baker family ownership.  It is likely that it was the home of his daughter Mary and her husband Ian Gilbraith.  We believe that the Wendy House and Pavilion date from this time. See Garden for more information.
In 1933 the Dell House became The Dell Hydro, on the back of the famous Malvern Water Cure but about 60 years behind the rest of Malvern.  It was owned by Mrs D G Cullen-Evans, Hon Member of the Association of Naturopaths.  The brochure of the day described it as having “…beautiful gardens and grounds ... Glorious air; wonderful views; perfect seclusion.  Only the song of the birds is heard.  A charming place of comfort and healing...”   By 1950 the house had become a hotel.
From 1951 to 1958 the Dell was known as Lucidor House of Healing. This establishment was owed and run by Frederick William & Lillian Frances Gozna.  In Frederick’s notebook he records:It is a bit of a mystery what went on at Lucidor House. The final entry in the notebook is: 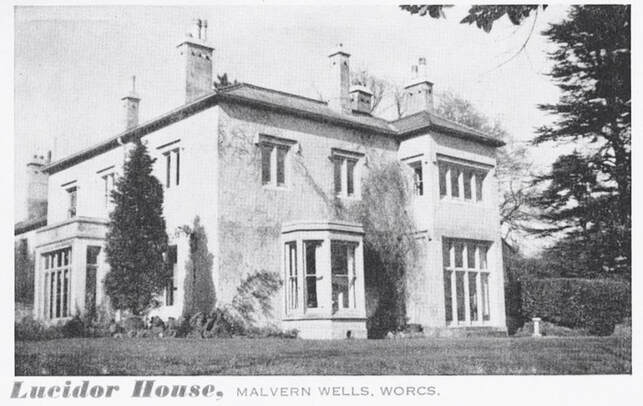 From 1958 to 1961 the Dell was the private home of Peter and Esmee Bodgener and family.  The following are extracts from a letter we received in 2016 from Michael Smith who was working with Peter Bodgener.

"We visited ‘The Dell’, then called ‘Lucidor House’ and run by an odd couple on the point of moving out.  We walked through the woods to the dell, and it was lightly snowing, which made the whole thing magical.  On the front of the house was a small outbuilding with its own front door and a passage through to the main house.  It had dark curtains, low lighting and a divan bed - I think it had been used as some ritual place - and this was to be my home for the next three years.  We called it ‘The Temple’."
From 1961 to 1967 it was a Hostel for Birmingham Society in Aid of Nervous Children. During this time we believe that much of the garden was sold off by the charity. We also know that house was in a very delipidated condition when the next owners, Frederick and Mollie Towners bought it for a family home.  They renovated the whole house and cleared a lot of the garden.
In 1972 Gordon and Margaret Thurlow bought what was now known as The Dell House. Initially they only bought the land immediately surrounding it, the rest having been sold off for housing development. Realised how this would impact on them they managed to raise enough funds to buy some of the land back, which is why the boundary is such an odd shape today.

What is now the Butler’s kitchen was then a large walk in larder with stone shelves, hooks in the ceiling for hanging meat etc. and zinc mesh and bars covering the windows. The Function Room was their dining room. What we now know as the Nursery was converted into a granny annexe, using the Smoking Room as the entrance and turning round the servant’s stairs.
The Thurlows sold the house in 1984 and the new owners started the conversion to holiday accommodation. By the time they sold it in 2002 it was four B&B rooms and three self catering units, one of which being the former stables.  This use was continued under the next owners, and is how it was laid out when we first looked at in in 2014.  We were lived in Cambridge, which had been our home for 27 years.  The time was right for a change - we had long talked about running a small B&B, probably in the Peak District 'when the boys left school'. To cut a long story short, we bought the Dell House and in August 2014 it became our home.
The house was somewhat bigger than we had intended, but we welcomed the challenge to revitalise the house and garden. The first thing we had to do was replace the roof and then the new main boiler. We’ve done what we can to improve the environmental performance of the house.  We’ve had several of the windows remade as double glazed, and have secondary glazed or draft proofed most of the others.   Here is more information about how we run the business as sustainably as we can. Although the house is not listed we are treating it very much as if it is, and consider ourselves custodians of it. ​
This is a summary of the information we have gathered about the house. There is more detail in a booklet, is available to purchase, email stay@thedellhouse.co.uk