The Dell House
The Development of the Tree Carvings
​Tree carvings have become rather a feature of the garden.  We inherited a bare 30ft trunk in the lower garden, and w found Hereford carver Steve Elsby.  We wanted something perched on the top of the trunk.  A bird would be too big, and we suggested maybe something 'dragon like'.  We sent him a photo, we got a sketch back, and that was were it all started.
We decided the dragon needed a name. Google searching found the mythical dragon Taramand, who had reluctantly slain his corrupt brother, and then would not take the kingdom.  The story continues
He went into exile with his son, who began to roam in the night, seeking a homeland. He came upon a tall sweet-chestnut stump in the foothills of the Mal Vern and rested a while.  Here he found the new settlers cutting back the evil Binding Weed and Brambling Thorn that had taken hold of the land.  He stayed to watch over the settlers and to flame the shoots of the Binding Weed when they tried to creep back in the night. We find from the legends that Tama-First-Without-Name was comfortable in his new role as Watcher and made it known that he wished to take the name “Tamakander, Son of Tamarand, Watcher of the Lower Gardens and Scourge of the Binding Weed."​
Tamakander was followed by “Norbert” the owl and “Green Man” face in the Tulip tree stump.  The owl was named Norbert by the girls from a young family staying here at the time. ​
The second main carving was the trunk of a Lawson Cypress, which was far too close to the house.  It is now a carving based loosely on the Rhineland Castles of King Ludwig – which is a quiet reference to modern boardgaming and the game The Castles of Mad King Ludwig
In 2018 we had to have the large but diseased oak tree by the front gate taken down.  With the help of a local farmer we got the main pieces of trunk down the garden, and used them to create the horse, named “Maycorn” (carved in May, from oak).  We also had badgers and a woodpecker carved from some of the pieces left.
‘Big George’ was carved out of the oak trunk.  This was based on the concrete chess piece we found when clearing the area that is now the garden railway.
The most recent additions to the carvings are two moles, inspired by the book The Boy, the Mole, the Fox and the Horse by Charles Mackesy, given to us by grateful ‘between houses’ guests over the lockdown winter of 2020 / 21. 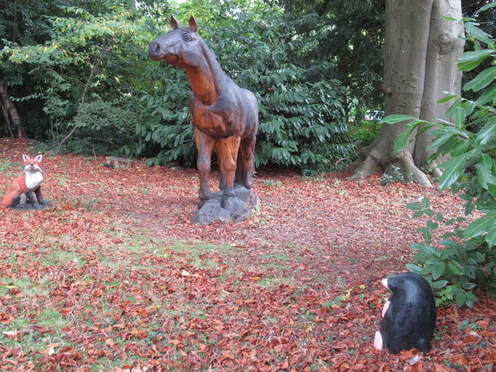 Maycorn with her companions in 2021. She's matured well.
The only carving we’ve had not using our own wood is in the area we’ve named the 100th Acre Wood, beyond the Wendy House. You'll need to come and visit the garden to see why.

We made a video about the carvings during the summer of 2020, when we had more time than usual.